cancel confirm NSFW Votes: (0 votes)
Are you the publisher? Claim or contact us about this channel.
0
Showing article 344 of 671 in channel 63112884
Channel Details:
Viewing all articles
Browse latest Browse all 671
0
0

Members of Eagles of Death Metal have recounted in harrowing detail how events at the Bataclan unfolded during the 13 November terror attacks in Paris.

The band, who were headlining the concert venue when 89 people were killed, spoke in an emotional interview about how they escaped the Bataclan and how the attacks affect the band’s future.

Eden Galindo, the band’s guitarist, Jesse Hughes, co-founder and vocalist, and Julian Dorio, the drummer, exited the venue together through a side exit. When shots were fired, they all immediately took cover either behind the drum kit or to the side of the stage.

“I think what really shocked me at first was that we’re a loud rock band, you know. The power of the band on the stage through the PAs is hard to trump and the initial shots were so powerful for me that I immediately, I knew something was wrong,” Dorio said.

They ran from the stage when their crew member, Boot, who saw the gunman’s cartridge run out, called for them to move. The group headed to the dressing room, to search for Hughes’ girlfriend, Tuesday. But instead Hughes came face to face with a gunman when he opened a door to the hallway: “He turned on me, brought his gun down, and the barrel hit the doorframe.”

Hughes immediately called for those following him to turn around and ran back downstairs. The group found Tuesday and exited through a side door. Upon reaching the street, Hughes noticed that while people were pouring out of the exits, many were not fleeing.

“People just didn’t seem to know what to do,” he said to Vice. 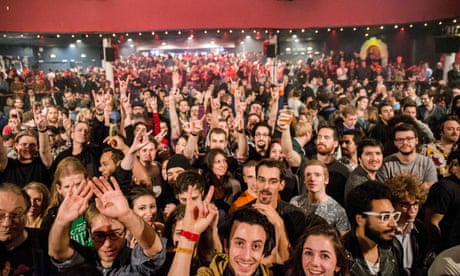 The band’s bassist, Matt McJunkins, did not leave the venue with the rest of the group. When the shooting started, he ducked behind the monitor desk and curtain. But fans immediately pushed their way through a door onto the stage and headed for a room in the back. McJunkins knew there was no exit on his side of the stage, and attempted to tell others.

“I see the pops go off, the lights flashing, sort of dive over and then just have to make that decision of do I really want to run across the stage or do I want to go in this room and hope for the best,” he said.

He retreated to the room with a large group of people, who immediately started grabbing chairs to barricade the door. A bottle of champagne, left in the room’s mini-fridge, was set to be used as the only weapon they had.

Many occupants were injured and bleeding. One man applied pressure to a gunshot wound on a woman’s thigh, McJunkins recalled. The room was flooding, as a slow leak brought the water up to their ankles. The water trickled down the stairs, which those trapped in the room worried would alert the gunman to their presence.

Finally, there was an explosion “that just shook the whole room and probably the whole building”. A suicide bomber, McJunkins would later learn.

Shawn London, the band’s sound engineer, was in the back of the venue, off to the side, in front of the doors.

“The show went well, these kids were having a blast, they were having a great time, the smiles, the dancing, the singing along with each song. It’s heartfelt,” London recalled.

But then he heard what he thought was firecrackers behind him. Fans started running towards his console and hiding behind it.

“I was still standing up and I could see the gunman and he looked right at me and he shot at me and he missed and he hit my console and buttons went flying everywhere,” London said.

He immediately dropped to the ground, and huddled with those around him, waiting for the shooting to pass.

“He stayed there and continued to shoot and shoot and slaughter and just scream at the top of his lungs ‘Allahu akbar’. And that’s when I instantly knew what was going on,” London said.

When those huddled behind his console heard the bullets run out, they made to escape. Six managed, but the rest retreated to their hiding spot when the gunman started shooting again. London waited, and after another 30 rounds, he picked up an injured girl next to him, who had been shot in the torso and leg, and ran. Before they reached the front glass doors, the gunman resumed shooting, shattering the glass when London was a foot away from pushing it open. Finally, he made it to the street.

After getting to the police station, Hughes said he called Josh Homme, who does not usually tour with the band and was not present at the Bataclan on the night of the attack. Upon receiving the call, Homme said: “It took a second to believe that that’s really occurring. Because it wasn’t on the news yet.”

Homme immediately went to the band’s office to do “anything you do if you’re not there to bring them home”.

In a separate interview with Hughes and Homme, the band co-founders talked about the future of Eagles of Death Metal in the wake of the attacks.

Hughes said he could not wait to return to Paris and play again.

“I want to be the first band to play in the Bataclan when it opens back up,” he said. “Because I was there when it went silent for a minute. Our friends went there to see rock and roll and died. I want to go back there and live.”

Hughes and Homme tearfully commended the heroism of the many people who risked their lives or died trying to help others. Nick Alexander, 36, who was selling merchandise for the band, was one of victims of the attack.

He died protecting his friend, Homme said, “never calling for help because he didn’t want others to get hurt”.

Hughes described how terrorists killed fans who were hiding in the band’s dressing room.

“Several people hid in our dressing room and the killers were able to get in and killed every one of them, except for a kid who was hiding under my leather jacket,” he said. “People were playing dead and they were so scared – a great reason so many were killed was because so many people wouldn’t leave their friends. So many people put themselves in front of people.”

Homme said he wished he could talk to each victim’s parents. “I sort of want to just get down on my knees and say whatever you need. There’s nothing I can really say because words just fail to grasp the thing. That’s OK, too, you know? That’s OK there aren’t words for that. Maybe there shouldn’t be.”

The band members said that they would continue to make music. “Music is what we do, it’s our lives. and there’s no way we’re not going to keep doing it,” McJunkins said.

The bassist added, bursting into tears: “But hearing from people, hearing their stories – we don’t want that to stop. Anybody who wants to reach out to us, they are welcome anytime. And playing every night and seeing those smiling faces out in the crowd, that’s what keeps us going. That’s what makes us play a show. That’s why we play. No way we’re not going to keep doing that again.”

Be brave, be good, and be great: A valedictory address